In some way, Antonio Marras always riffs on his Sardinian roots, but for pre-fall, he ventured beyond those. 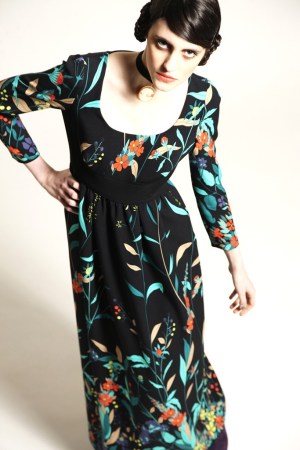 In some way, Antonio Marras always riffs on his Sardinian roots, but for pre-fall, he ventured beyond those. The designer looked to Russia for inspiration — from photographer Sergey Prokudin-Gorsky — known for the striking color saturation of his images — to poet Anna Achmatova, designer Irene Galitzine, and Anna Karenina, perhaps the country’s most famed, if fictional, fashion muse.

With so many reference points, the collection went in quite a few directions, which Marras united via his signature artisanal charm. For example, he used floral prints on a crepe tunic with languid palazzo pants and teamed a flower-motif skirt with a chic color-blocked sweater. Karenina was present in the shape of several empire coats and dresses, and in chicly somber separates such as a knitted wool top shown with a mixed-media skirt — the latter a mélange of patterns,  including stripes and an ornate one that read “brocade.”