Jonathan Anderson channeled several abstract ideas into a pre-fall collection that put the focus on exaggerated silhouettes with a retro spin. 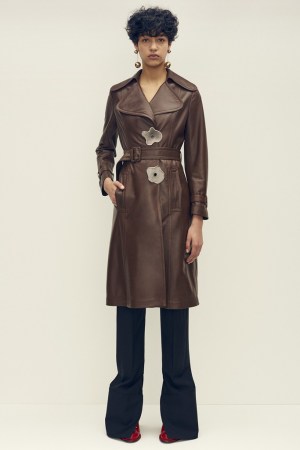 Jonathan Anderson channeled several abstract ideas into a pre-fall collection that put the focus on exaggerated silhouettes with a retro spin. “[I was] looking at the Sixties, looking at odd modernity,” he said. “It’s evoking nostalgia, but not making it decade specific.”

Many looks featured high-waisted pants with a flare created by a split at the ankle and hems that brushed the floor. One black pair was shown with a jacquard and chenille knit top in an off-kilter, red-and-brown pattern, while another version was teamed with a chocolate brown belted leather trenchcoat.

Those elongated silhouettes contrasted with a few youthful shapes: a short camel-colored dress in a fluffy, teddy-bear-like fabric, and a skater dress in a white floral jersey cloqué. The lineup also featured experimental fabrics Anderson developed himself, including a pink, calf-length dress with a ruffled hem in a jacquard jersey worked into a textural pattern that looked perforated.