Marcia Patmos cited a wide range of pre-fall influences, among them Thirties and Forties gangsters, and artisanal textiles from Madagascar and Bolivia. 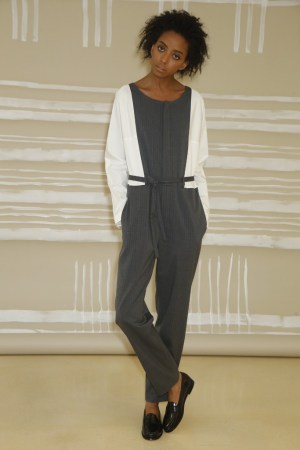 Marcia Patmos cited a wide range of pre-fall influences, among them Thirties and Forties gangsters, artisanal textiles from Madagascar and Bolivia, and “The Art of Japanese Joinery,” Kiyosi Seike’s book on wood joints. With so many reference points, the lineup could have gone in many directions, but Patmos pulled it together effectively, mainly via a slouchy men’s wear vibe. Several pinstripe looks, such as a robe teamed with matching pants and a linen top, made that point. The designer’s layering of knits — the oversize wool coat with tweed insets shown over a wool cardigan and slouchy leggings — was also appealing.