Rodriguez offered plenty to covet in a pre-fall lineup he hopes will mirror the success of his most recent resort offering. 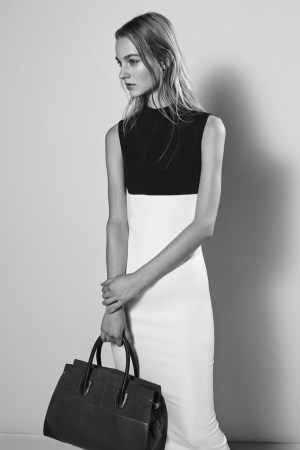 “We call it the ‘covet-ability’ factor.” That’s how clothes are evaluated when Narciso Rodriguez prepares a collection. Otherwise, he said, there’s a tendency to get “too caught up in ‘fashion’ and turn off women who want to wear things.” Rodriguez offered plenty to covet in a pre-fall lineup he hopes will mirror the success of his most recent resort offering, which was up more than 73 percent over last year.

Here, he rendered alluring the slyly forgiving silhouettes he loves as dresses and shapely jumpsuits, giving them a graphic focus via colorblocking, contrast seaming and abstract embroideries, and insets inspired by Matisse’s cutouts. While black and white formed the base of the collection, Rodriguez worked in a range of color accents not usually found in the typical collection — pale pink, hot pink, forest green, citron — the last positioned against off-white on a cashmere coat that reverses to gray. He also amped up his evening range with gowns that hinted at Thirties glamour à la “The Women” but sans a trace of retro schmaltz.