The Wild West interpreted in a sleek, modern way pretty much sums up the designer's lineup. 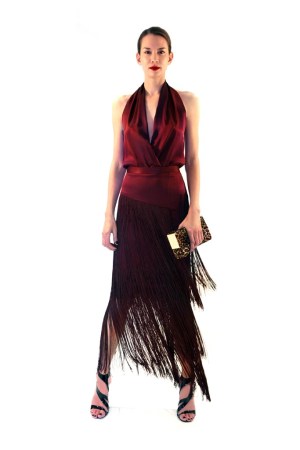 The Wild West interpreted in a sleek, modern way: That pretty much sums up Tamara Mellon’s pre-fall lineup, where a low-cut black jumpsuit featured a fringe overlay and a burgundy satin skirt had tiers of it.

Mellon, who has made fringe a constant in her handbag collection, also went for a Seventies rock vibe that played off the saloon theme via tailored denim pieces with cutouts and stud detailing.

For evening, a navy and gold sheer T-shirt dress featuring a tiger-print pattern was a standout.