“A big move toward feminism” is how Jonny Johansson introduced his pre-fall effort. 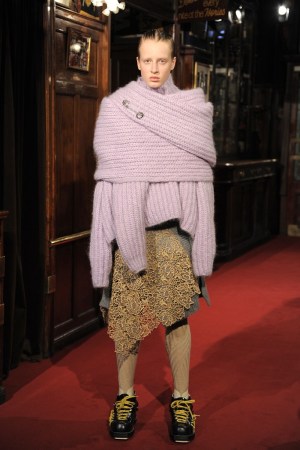 Johansson employed traditional fabrics such as Shetland wool, Harris Tweed and necktie silks, citing a desire to move away from technical fabrications. “To use those kind of hyper-classic materials and make them look new was challenging,” he said.

The designer carved them into voluminous coats and blanket capes and created deconstructed knit sweaters and dresses with feminine lace panels needle punched on the front. Masculine tweeds were tailored with a young spirit, including cropped jackets with frayed edges and big antidrug slogan patches, along with cropped pants and wrap-style miniskirts.

The sporty, cozy elements were spiked with feminine touches of Solstiss lace, including high-neck tops in shades of cool lilac and golden yellow. Bold and vaguely tribal metallic jewelry lent additional cool, bringing to mind images of singers M.I.A and FKA twigs swooshing down the slopes.