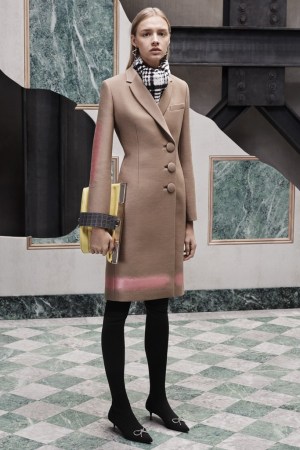 Legacy and currency. Elegance and attitude. French chic and American cool. Contrast defines Alexander Wang’s presence and purpose at Balenciaga. It was probably inevitable that Wang would at some point deal with the concept head-on. For pre-fall he did so boldly and with considerable panache, both within individual looks and across groups.

The umbrella juxtaposition was that of sophistication against street. At its most ladified, it appeared in tailored, neutral-toned silk cady pieces brushed with strokes of fanciful color. Far racier were precision lingerie looks inset with metal grommets to tough-chic effect. Wang also applied his premise to a “fur capsule.” He worked the humble T-shirt along with bomber, peacoat and other outerwear standards in shirred mink, all engaging expressions of the street-chic fusion.