Confident about adding a touch of romance to his pre-fall collection for Balmain, Olivier Rousteing introduced his first flower prints for the house. 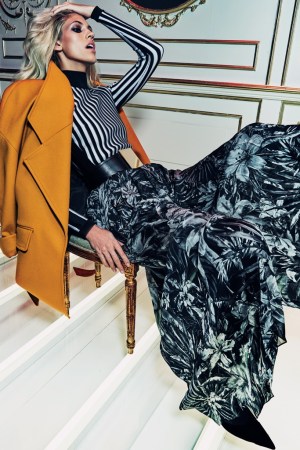 Confident about adding a touch of romance to his pre-fall collection for Balmain, Olivier Rousteing introduced his first flower prints for the house. A painterly, wallpaperlike motif of anemones and buttercups in bright red or blue appeared all over velvet jackets with matching fluid dresses, as well as on a long gown and his palazzo pants — a look he is clearly pushing.

Channeling the glamour of Seventies Parisian couture, silhouettes didn’t forsake the label’s signature sexiness, but they were loosened up in terms of shape. With nary a shoulder pad in sight, except for in a sleek jumpsuit whose torso was draped in black jersey knit over polka-dotted tulle, the collection was filled with generous proportions, as in the mustard-yellow belted coats with dropped shoulders. Heavy embroidery was worked in big, chunky crystals in emerald and ruby tones, or as cascades of sparkling fringe dripping from short dresses.
In light of planned flagship openings, Rousteing said he wanted to give his customer a wider offering. In particular, he developed knitwear ranging from a viscose evening dress to more accessible graphic sweaters.