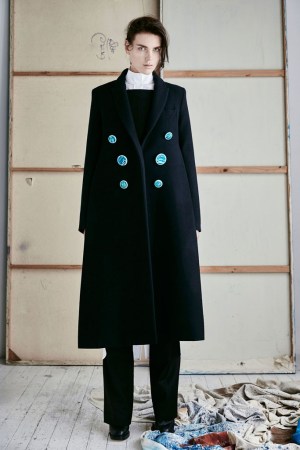 Kym Ellery found her pre-fall muse in Seventies-era David Bowie — from his Ziggy Stardust persona to The Thin White Duke — an inspiration most evident in the collection’s fabrications. There were paisley brocades, deep-blue velvets and gray tailored suiting (a nod to the Duke). A shimmering gold tinsel fabric was used ever so casually on a turtleneck, while a silver-foil coat took a more flamboyant turn.

In true Ellery form, proportions were voluminous — her signature bell-bottoms came exaggerated, off-the-shoulder tops had elongated bell sleeves, and an oversize A-line coat — also done in a vest version — featured ceramic painted buttons commissioned by her mother, who is an artist.