The 1974 Agatha Christie film adaptation “Murder on the Orient Express” was Hussein Chalayan’s touchstone when designing his pre-fall collection. 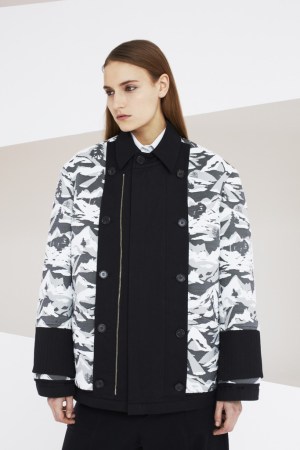 The 1974 Agatha Christie film adaptation “Murder on the Orient Express” was Hussein Chalayan’s touchstone when designing his pre-fall collection. “It’s to do with the relationship between the Occident and Orient….how the Orient was seen as kind of mysterious and fearful and dark,” he said. “I also like the mystique in [the film], and the suspense, it’s so right for winter.”

Rather than offer a literal interpretation, however, Chalayan abstracted ideas and applied them to his signature draped-and-folded silhouettes. He showed one gray and white jacquard depicting the titular train stuck in a snowstorm, surrounded by trees and mountains, which also appeared on a cocoon-style coat. He also traced the train’s journey as a line on a map on sweaters. Other looks subtly nodded to the film’s higher-octane elements, as well. A woven fabric done in black tulle and silver thread appeared as a panel on the back of a crisp white shirt, evoking a robe​ that’s worn by Lauren Bacall’s character in the film, Mrs. Hubbard.