For pre-fall, the designer looked to Jeanloup Sieff’s intriguing photographs of Charlotte Rampling and borrowed from Jane Birkin’s bohemian chic. 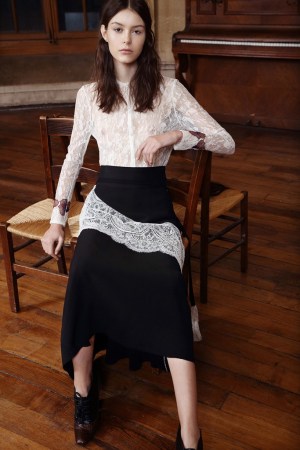 For pre-fall, Sharon Wauchob looked to Jeanloup Sieff’s intriguing photographs of Charlotte Rampling and borrowed from Jane Birkin’s early Seventies bohemian chic. Saying she was compelled by “the sacrifices these women made by moving away from mainstream,” Wauchob noted that she “wanted to make the product as sincere as possible.”

This translated into bias-cut skirts made from 3-D lace that looked as if it were knitted, as well as beautifully hand-appliquéd floral motifs. The latter appeared on semi-transparent lace dresses and on the cuffs of crisp white shirts, some of which were deconstructed via a slit on the shoulder or lace inserts in the back. Unadorned three-quarter-length pants, notably wider at the bottom, and bell sleeves were reminders that this was a period-inspired season.

Wauchob’s artisanal workmanship looked surprisingly modern thanks to the toned-down shapes it decorated. To wit: An oversize Mongolian-fur stole, the most flamboyant piece in this tasteful and feminine collection, looked sublime when slung nonchalantly over a long knitted sweater.