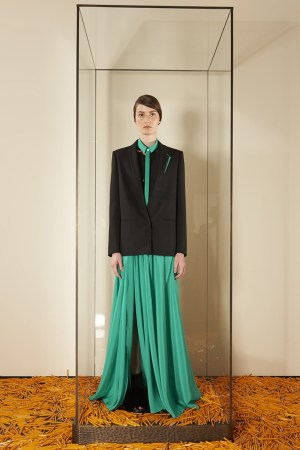 Goga Ashkenazi embraced the starry sky as the main theme of her pre-fall lineup for Vionnet. The motif appeared in a pop-graphic interpretation on a wool jacquard tunic and on a mohair and wool knitted dress with Lurex details. The white tattoos of an African tribe inspired the sketched stars decorating a techno organza gown with bias-cut draping, while a fluid silk dress and jersey tops and pants featured a printed and embroidered version of her son’s colorful drawing of the night sky.