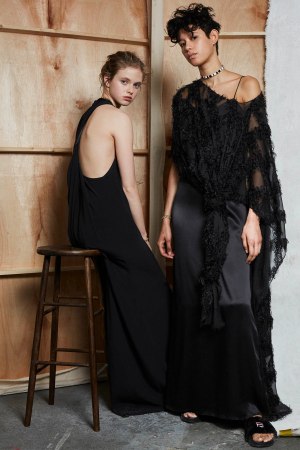 Baja East was founded in part on the concept of what designers Scott Studenberg and John Targon call chunky, deluxe cashmere “f—k you” hoodies and sweats that serve as the moneyed creative class’ version of office attire — the middle finger to anyone who has to wear a real suit to work. But for pre-fall Studenberg and Targon branched out in two directions, offering more dressed-up options as well as more affordable versions of their “dressed-down look.”

The former came in shiny, opium smoke-colored crepe back satin in off-the-shoulder wrap tops, dresses and languid pajama looks that captured the label’s casual, “don’t want to look like I care” attitude for evening. Studenberg and Targon focused on, for lack of a better term, “going out tops” to go with their signature harem pants per customer demand. “As much as editors know how to style things, when you go to the actual store, the customers are like, ‘What do I wear with that?’” said Studenberg. “We wanted to give them the full outfit.”

On the daywear end, they fleshed out core T-shirts, French terry and cotton knits as alternatives to their upper-echelon cashmere, wisely opening up Baja East to a larger audience. Because not everyone can afford “f—k you” cashmere.