A punk but chic collection that fused elements from British subculture and refined Parisian fashion. 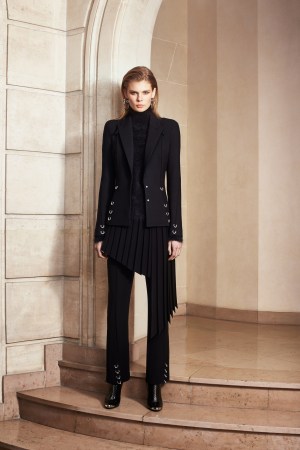 Living between London and Paris moved David Koma to engage elements of both local cultures for pre-fall, resulting in a collection that was “punk but chic,” said Virginie Courtin-Clarins, Mugler’s marketing and communications director, who presented the lineup in New York in Koma’s absence. (Courtin-Clarins is the granddaughter of Clarins founder Jacques Courtin-Clarins. Groupe Clarins owns Mugler.)

The chic outweighed the punk, which was probably for the best, but Koma’s fusion of once-radical motifs — hardware; kilts — and Mugler’s sleek, anatomical signatures was complimentary and cool. The starting point was a 1994 leather dress from the Mugler archives which Koma reworked. Taut and short with a high neck, long sleeves and seams that traced womanly curves, the black leather dress was decorated with silver hardware such as ring piercings over the nipples and boomerang-shaped slivers on the sleeves. Hurt so good, indeed.

Courtin-Clarins noted that this collection was a big push for daywear, even though the label’s signature “wow” pieces were well-tended to with daring jersey gowns and the aforementioned sharp leather piece. Knitwear was a big focus, and, or the first time, Mugler introduced denim with jean jackets and jeans with M-shaped back pockets and a T with a single strategically placed piercing detail. “It’s like a nipple piercing but much less painful,” Courtin-Clarins said. The handbag range, introduced for spring, expanded with two new styles —  a smart expansion, as there are plans for Mugler’s first store to open in Paris by the end of the year.