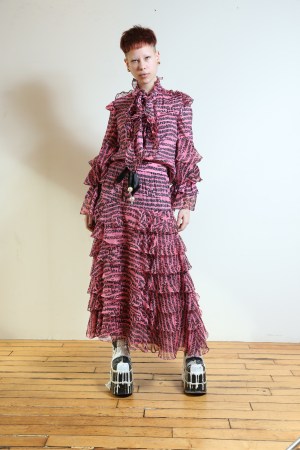 By his own admission, Nicola Formichetti hasn’t always taken business seriously. But taking on the pre-seasons for the first time, as he did for Nicopanda pre-fall, is a solid indication that his attitude has changed. “This is much more personal,” Formichetti said of the venture, now in its fourth season. “I really listened to the buyers, which I never did before.”

Fans of Formichetti’s cartoonish fringe creativity, which has been tapped by Diesel, Uniqlo, Mugler and most famously Lady Gaga, needn’t fear — Nicopanda is not a sellout collection. The buyers aren’t interested in that. “They don’t want simple things that you can buy anywhere,” said Formichetti.

Pre-fall was a focused outlet for his semi-unisex, neo-street subculture stylings that filter his imagination without flattening it. Inspired by the photocopied and stapled fanzines Formichetti used to collect in London in the Nineties, hoodies and sweatpants featured strange, newspapery prints by Sam Rolfes, an artist the designer scouted on Instagram, where he also found his models. Ruffled blouses and long drawstring skirts with oversize pearl details bore a “Nicopanda panic” print — essentially the logo maniacally repeated. There were silver leather “jeans” and a cropped jacket with convertible sleeves, as well as colorful Muppetlike faux furs. Mixed together, it merged goth, punk and raver in an accessibly cool way. Formichetti doesn’t want to go mass, but he does want to sell. He said there are plans to expand into accessories, small leather goods and other consumer categories under the name Nicopanda World this year.