Ashley and Mary-Kate Olsen experimented with their pre-fall press strategy by releasing a single image of the poetically minimal collection for reviews, holding the rest of the images until delivery time. 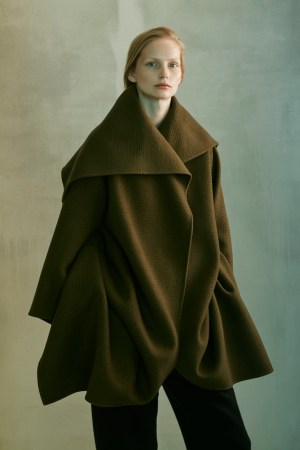 Ashley and Mary-Kate Olsen were among the designers experimenting with their press strategy for The Row’s pre-fall. During a presentation of the full collection in the showroom, Ashley echoed the chorus of industry issues concerning lag time between press and delivery. Also, “We get knocked off a lot,” she said. A single image was released for reviews, with the rest being held until closer to May’s delivery.

The collection was poetically minimal. Plain but luxurious pieces were distinguished by impeccable tailoring, fabrics and long, generous proportions. Traces of Renaissance paintings, which Ashley referenced, could be seen in shades of crimson, loden and smoky gray, as well the subtle drama of blanketlike draping and bunchy volume around the shoulders. There were cloque robe jackets, pristine white cotton shirts and slipdresses, and chicly sloppy, extra-long ribbed knit pants.

After 10 years of development, the shoe collection is off and running, and almost completely dedicated to fantastic flats: satin slide sandals; mary janes in velvet and alligator; soft suede booties, and vaguely Mod-ish boots with moderate heels.