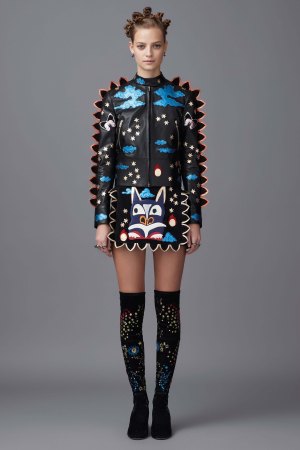 It wasn’t a pre-fall collection, it was a collection, and a magnificent one. That it happened to be shown near the end of the seemingly endless pre-fall season only emphasized the degree to which it raised the bar — as well as the reality that, for all of the time, attention and verbiage focused on the pre-seasons, much of what we see looks more like nice clothes for interim deliveries than significant fashion.

Not so this gem. Maria Grazia Chiuri and Pierpaolo Piccioli did a quick in-and-out of New York to present in person. “We’ll see you in two weeks [at couture],” Piccioli said as WWD’s appointment drew to a close. “Before that, we have men’s, next week.” Neither of those upcoming events distracted the designers from this labor-intensive, thought-intensive lineup. Yes, given their decorative aesthetic, Piccioli and Chiuri may have natural creative edge, and surely not all designers can or should aim for a similar level of opulence; life isn’t all embroideries of exquisite airborne creatures and dress-length renderings of the Chrysler building realized in shimmering micro paillettes. But fashion is, as Chiuri noted, about desire — no matter when on the calendar it’s shown.

The designers took up residence in the old Andy Warhol Factory space, which resonated on levels both practical (beautiful, light-filled space) and emotional (they view their Valentino as a creative factory rooted in experimentation and, when appropriate, collaborations). Here, they continued with spring’s cross-cultural current, now invoking references hailing from Japan (flora, fauna) to New York’s skyline, including nonspecific homage to a brilliant Milanese-New York hybrid of yore: Fiorucci. “At the time, fashion was couture or very basic,” Chiuri said. “He was the first to mix bits and pieces together.”

Here, too, was a pastiche of silhouettes, materials and decoration: a dress made of countless, multicolored crystal stars joined point-to-point on black tulle; wacky astro-motif shearling cape over suede miniskirt and boots; embroidered black lace kimono gown, its delicacy interrupted by a thick leather belt. The work was incredible, from the couture-worthy embroideries to the outerwear intarsias, equally captivating as a bold heron-motif leather coat and gentle ombré blue mink inset with birds.

While Chiuri and Piccioli are most associated with exquisite, intensely wrought eveningwear, they showed plenty of clothes for the bright light of day. And if a bright-red “wonderland” embroidered coat over thigh-high red patent boots registered as a divine novelty, not so an almost-classic pea coat, adorned with a single, floral appliqué.

Holding it all together: The designers’ impeccable shared vision, impeccable execution and something less easy to define. “We were looking for something graceful,” Piccioli said. “Grace is something you don’t see; you feel the grace.” And the fashion.