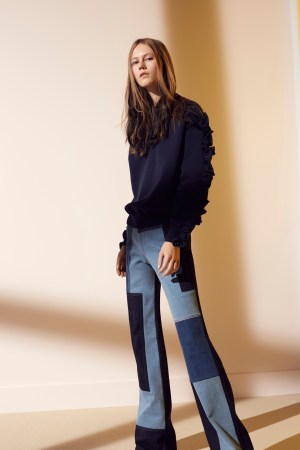 We’ve all heard it — a picture is worth 1,000 words. As an aspiring pop star, Victoria Beckham wanted to be as famous as Persil Automatic (the Tide detergent of Europe), a bon mot recounted by countless media outlets. Now, Beckham is expressing the thought visually, by putting a graphic that nods to Persil’s packaging — without copying — on a T-shirt.

Such is the ebullience of the designer’s Victoria Victoria Beckham line, particularly this season. “We have lots of fun with it,” Beckham said during a walk-through. Conversation prints — a feisty fruit basket motif and “cocktails” featuring undrinkable but pretty nonalcoholic concoctions photographed in her studio — were blown up and splashed across dresses and separates cut simply with a hint of the Sixties. Then there was the denim, recently folded from its former stand-alone positioning into VVB. The news here was in patchwork looks, inspired by a scarecrow Beckham said she encountered during a visit to a Los Angeles-area pumpkin patch — no kidding. Yet lest the revelry overwhelm, she offered moments of calm as well in pinstripes used unexpectedly, on, for example, a spunky T-shirt dress. And like Persil, it’s all got to perform for the customer. “It’s about getting the balance of the fun and making it wearable as well,” Beckham said.