More, more, more was the theme of Oliver Rousteing's pre-fall collection for Balmain. 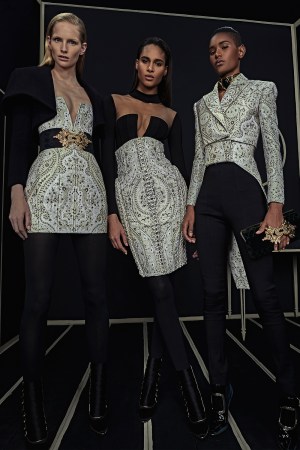 Olivier Rousteing delivered nothing less than what’s come to be expected of him for Balmain pre-fall. In other words, the collection was about more, more, more. Taking cues from the opulence of Eighteenth century decor, including Versailles and “the sensual and elegant style of Madame de Pompadour,” Rousteing’s lineup had more fringe, more crystal, more velvet and more form-fitting looks than even his most glitzy previous efforts.

Then there were the Bob Mackie-Does-Versailles-in-Vegas dresses in lace or deep velvet dripping in over-the-top cascades of beaded fringe, tassels and thick, crystal and pearl embroideries. A few of the dresses had sheer panels of crystal-embellished fishnet, some of it so densely ornate it probably weighed half as much as the model wearing it. Jacquard pantsuits and short dresses referenced the rococo walls and furniture of the famous French Castel, while black-and-white checked robes and knits echoed the floors at Grand Trianon.

Rousteing’s passion for the Baroque is as familiar as the criticism often leveled against it: Excellent in craft; tacky in taste.