Chemena Kamali and Lucio Finale, who have taken over design duties while the company searches for a permanent replacement for Alber Elbaz, showed a flamboyant, risky pre-fall collection. 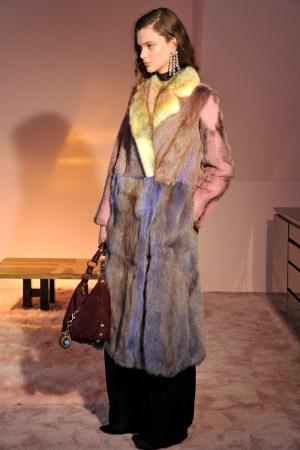 Chemena Kamali and Lucio Finale have very big shoes to fill at Lanvin, heading a new team of designers to temporarily replace Alber Elbaz, ousted in October after a stellar 14-year tenure. The company’s chief executive Michèle Huiban introduced Kamali, women’s wear designer, and Finale, in charge of bags and shoes, at a preview in Paris of the pre-fall collection. The pair will also design the fall 2016 runway while the company searches for a new creative director.

Kamali showed immediate confidence and polish, delivering a flamboyant, risky collection. Though she joined Lanvin from Chloé just a few weeks before Elbaz’s exit, she echoed his parlance about the customer. “She is about fun and likes to express herself — she is a real woman,” Kamali said, pointing out a few iconic Lanvin items including a sculpted mustard satin tunic constructed with graphic darts and worn over fluid black pants and stretch lace T-shirt.

Yet this was hardly a purely reverential collection, as the designer also cited recent retro subcultures as influences, specifically the New Romantics, who, in the early Eighties New Wave period in London, dressed in various historical and romantic themes. To that end, Kamali went soft with frills, which she sometimes paired with voluminous tailoring for an offbeat slouchy attitude. She worked with ample velvet and lace — familiar elements from her Chloé days — as well as an eyelet embroidery for a white cotton shirt with frilled collar and cuffs that peeked out from a rubberized black cotton trench. Patchwork was another motif, rendered variously in men’s necktie fabrics worked into appealing blouses and dresses, and furs, including a quirky fox in spray-dyed in hues of yellow, blue and pink.

Accessories, meanwhile, were opulent. Finale invoked the house iconography, employing the Lanvin mother-and-daughter logo medallion on some handbags and using Lanvin’s signature blue for bag linings and shoes soles. He also continued bag designs he sees developing into house icons. One example: the Gigi, shown in various sizes and finishes, including a patchwork of python. He went new as well, with daringly mixed metallic finishes and new hobo style bag with bronze studs and a dyed agate stone charm dangling in front.

It all made for an interesting debut pulsing with bravado, particularly for pre-fall. On the upside, the designers displayed an impressive fearlessness while delivering some very appealing clothes and accessories. But there were some awkward moments of proportion and cut. And Kamali in particular charted too many different directions — some of them foreign to the Lanvin aesthetic Elbaz defined. Come March, it will be her challenge to make a clearer statement about keeping some legacy — or just turning a new page.