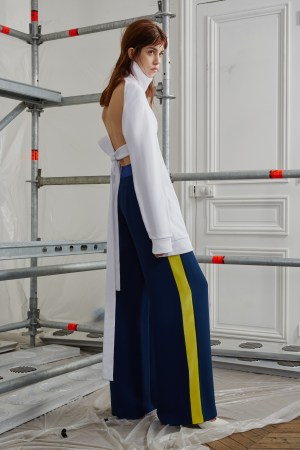 Call it augmented reality. Like Demna Gvasalia at Vetements, another fledgling label with a cultlike following, Virgil Abloh sees his Off-White collection as a riff on what people are already wearing. He grounded his pre-fall collection in men’s wear staples, tailored for feminine proportions.

The designer, who is also Kanye West’s creative director, tweaked a long trenchcoat by adding a high belt to create an Empire waistline, and adorning the sleeves with a subtle frill. Bell-bottomed cargo pants were paired with a cropped top to draw attention to the waist.

“To me, it’s always been about a safe, eclectic mix, because I’m sort of betting on the style of the time, but I’m just offering it as a twist in my point of view,” said Abloh, who was one of eight finalists for the LVMH Prize last year.

With Gvasalia taking the helm at Balenciaga, Abloh is already picturing a takeover of French luxury. “My dream job is to [be creative director at] a house one day…but make it young,” he said. “I see that as the future of fashion.”