Hussein Chalayan sent a conceptual lineup of jackets, coats, dresses, trousers and blouses filled with Greek-inspired ideas and layered structures that felt relaxed and luxurious for the modern working wardrobe. 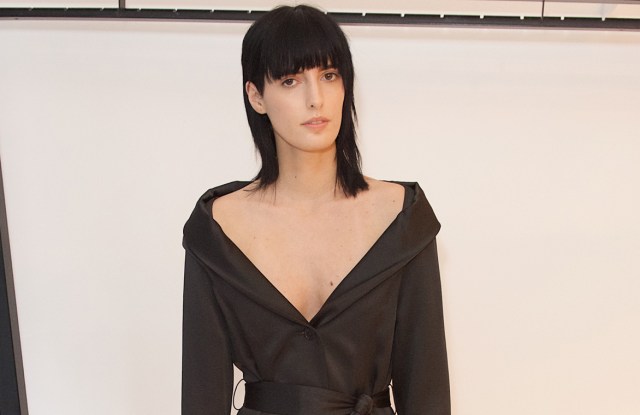 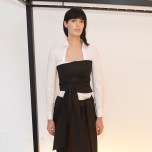 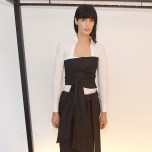 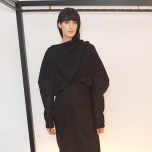 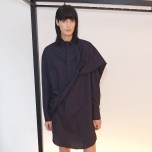 For pre-fall, Hussein Chalayan pondered the concept of the new individual and her needs.

“I was looking at the idea of how the Ancient Greeks were revived in the 19th century by Lord Byron,” said Chalayan, “and how the whole sense of personhood was redefined by northwestern Europeans. Then I looked at this idea of how the corporate world is shaping the way we present ourselves, and how Greek ideas have been reappropriated now.”

He sent a conceptual lineup of jackets, coats, dresses, trousers and blouses filled with Greek-inspired ideas that felt relaxed and luxurious for the modern working wardrobe.

Dresses and tailored shirting were interestingly constructed with frocks featuring scarves that can be worn as a scarf or draped. He developed sleeves into sashes, which playfully decorated a navy button-down shirt as the cotton material was draped and twisted diagonally across the bodice. The detail embellishment was also seen in a black-and-white button-down stretch cotton shirt, for which loose material was wound up around the waist and worn over a black wool skirt with the same wrap detail.

His Grecian take was translated into luxurious outerwear as seen in a waistcoat, which was tucked under a gray cashmere wool jacket.

Elsewhere, loose proportions drooped on generously cut tailored shirting, dresses and overcoats that were pivoted or meant to be wrapped tightly around the waist. The slouchy-fallen-off-the-shoulder silhouette continued in the form a long black button-down with a sash tied at the waist, paired with cropped black trousers. It also appeared on a black dress with the bodice adorned in a black-and-white graphic print inspired by the grid system of Manhattan and Ancient Greece. Small Greek figures were also cast onto prints, as on a voluminous navy dress.

The range was done up in hues of charcoal, gray, a burnt rose, navy, black and burgundy.