IsSixWeeksAfterFashionWeek = false
By Jessica Iredale and Miles Socha on January 10, 2017 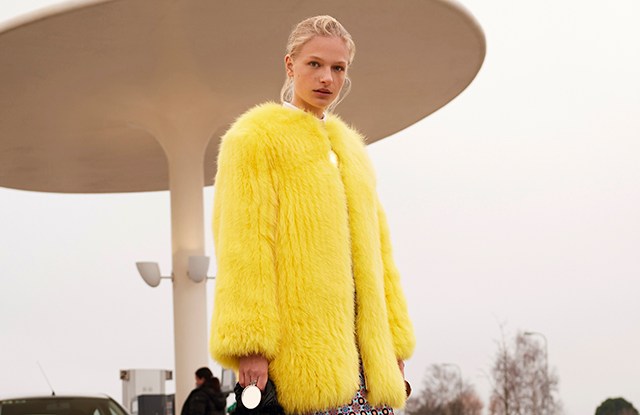 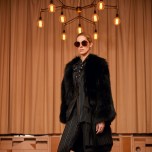 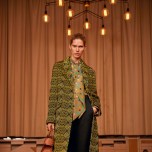 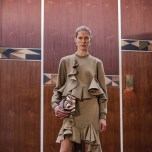 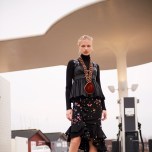 If there’s one thing to take away from the sprawling pre-fall schedule, it’s that there’s no one way to show a pre-collection. Riccardo Tisci’s method for Givenchy was one of the more unusual. He presented the collection in absentia in New York, sending his head of design Filippo Grazioli to talk through a handful of looks from the men’s and women’s lineup at Industria Studios while a moody video from the look book, which was shot in Copenhagen, played in the background.

In an earlier conversation, Tisci said Scandinavian respect for nature and reputation for pure design were among his key influences, noting butterfly prints and a focus on warm and soft fabrics, such as shearling, fur coat and bags. Lest anyone think Tisci has gotten caught up in the hygge — or cozy — craze, this was not a homey collection. In fact, the Danish references felt secondary to signature Givenchy codes. Eager to widen the brand’s register, he now divides the collection into three broad categories: fashion, classic and street. Within each silo, there were potent designs, even if they combined for a fragmented lineup.

Much of the fashion portion was obviously distilled from the strong colors, graphic dots and stripes, oversize geode necklaces and mandala motifs that gave the spring collection its gusto. A languid red suit was accessorized with a geode necklace big enough to rival one of Flavor Flav’s clocks. A taut pink, purple and blue mandala-printed jacket layered over a matching zip-off skirt and flared pants struck the triple-layered tailored silhouette Tisci favors. To soften it, he added a fluffy pink fur.

Russ Meyer’s outrageous 1965 film “Faster, Pussycat! Kill! Kill!” fed the sexy, yet sporty attitude of the street group, hinged on tight leather pants and thigh-high high boots, which were, as Tisci said, “sensual and powerful.” Nothing epitomizes current streetwear like the bomber and varsity jacket, a version of which he worked up in fur, per the Scandinavian mood, with a big Givenchy logo emblazoned on it. There was some crossover between categories. Tisci noted that fetish styles like bomber jackets appeared in cashmere and wool in the classic section. “Even a woman who is more mature and classic loves to wear a bomber,” he said. More traditionally elegant was a black lace gown trimmed in black beads. It looked as timelessly stunning in a Manhattan studio as it did in Copenhagen’s Vega concert hall, where it was shot for the look book.