Samuel Drira’s multifunctional approach to dressing was less literal for pre-fall, with a pared-back, contemporary interpretation of military themes. 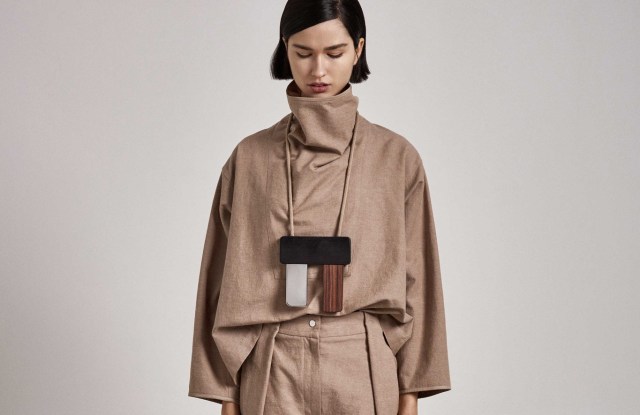 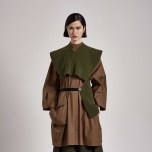 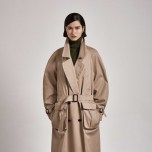 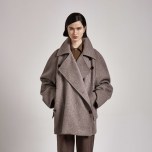 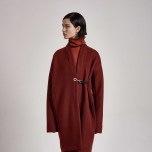 Samuel Drira’s multifunctional approach to dressing was less literal for pre-fall, focusing more on structure. His pared-back, contemporary interpretation of military themes was worked in an earthy palette of greens, browns, orange and beige and in a contrast between rounded, cocoon-like forms and sharper lines.

Egg-shaped coats in boiled wool ballooned out at the elbows, mirroring their overall silhouette, while zip features opened up the side of tailored wool jackets, offering  practical and aesthetic opportunities. Rivets and elastic loops reminiscent of parachute gear and outsized flap pockets contrasted with the softness of certain designs. A khaki wool skirt cut to look like an Army coat from behind flapped over the front as the model walked, adding interest to an otherwise utilitarian shape.

Knitwear went along with the theme, as in a long khaki column dress with a ribbed panel that could be worn loose and draped or zipped around the waist like a cozy corset alternative.

Drira introduced his singular vision to eveningwear, inspired by the idea of offering Tilda Swinton — whom he said has become a fan of the understated label — something to wear on the red carpet. One example was a versatile black crêpe column gown with snap fasteners across the back of the shoulders. Simple yet original, it could be adapted to have a cross-strapped open back and draped panels, or worn closed for a less daring, but equally elegant look.