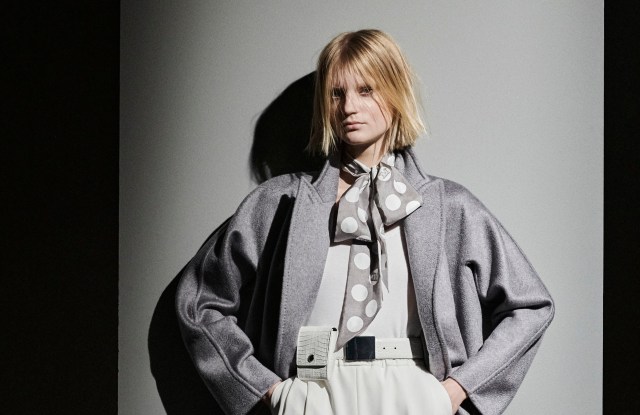 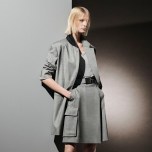 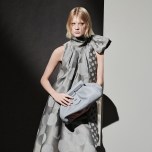 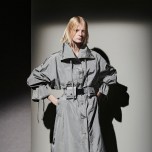 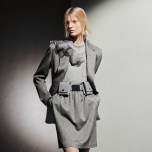 The strength and independent spirit of Lee Miller — brought to life in BBC’s “Lee Miller: A Life on the Front Line” documentary by Teresa Griffiths — inspired Ian Griffiths’ latest collection for Max Mara. (The two Griffiths are not related.)

“Lee Miller has definitely always been one of our heroines,” said the designer, referring to the powerful personality and distinctive attitude of the model-turned-photographer-turned war reporter. Certainly, Miller is a role model for Max Mara, which has long addressed working women who appreciate purposeful clothes.

In a wink to black-and-white pictures of and by Miller during her years as a war reporter, Griffith rooted his concise and focused collection in “combat tailoring,” mostly rendered in gray shades and peppered with utility details. Elongated vests and boxy blazers with a Nineties’ feel were matched with miniskirts and pants festooned with cargo pockets. A trenchcoat with dramatic sleeves was cinched at the waist with a pocket belt, which also put the focus on the waistline of a Prince of Wales jumpsuit with an aviator attitude.

The overall combat feel was counterbalanced in the lineup by more quintessentially feminine touches, such as the maxi bows on organza blouses, as well as the polka dots, rendered in different sizes, on silk dresses and shirts.

Anchoring the collection to the brand’s heritage, Griffiths also referenced a 1999 advertising campaign by Steven Meisel featuring model Carolyn Murphy posed as a modern Miller in a white suit. For pre-fall, the designer reedited that outfit featuring a deconstructed blazer that ties on the side. “When I joined Max Mara in the late Eighties, I made a name for myself by designing a blazer tied on the side,” Griffiths reveled. Thirty-something years later, that effortless and elegant attitude is certainly still relevant, especially since comfort and functionality are now king. Those women returning to the office after the pandemic will certainly find in this Max Mara collection many options to build their own uniform.