Chanel filmed its Métiers d'Art show at the Château de Chenonceau with a cast and crew of 300 and precisely one VIP guest: Kristen Stewart. 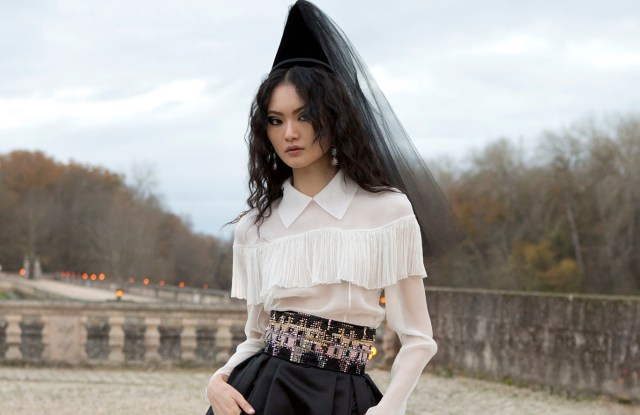 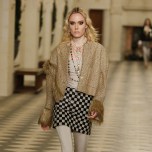 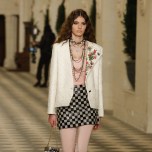 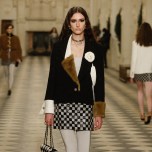 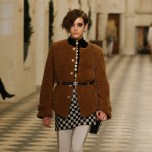 When foreign visitors take a guided tour of the Château de Chenonceau, one of the jewels of France’s Loire Valley, they are often intrigued by the interlocking Cs that appear throughout the castle.

The initials are those of Catherine de’ Medici, the former queen of France whose portrait hangs above an elaborate carved stone chimney bookended by lions. But to 21st-century eyes, they look remarkably similar to the Chanel logo.

Also known as the Ladies’ Château, Chenonceau has a history marked by a succession of powerful women, of which the Renaissance rulers, in particular, inspired the label’s founder, Gabrielle “Coco” Chanel. That the French fashion house chose to stage its Métiers d’Art collection there is therefore something of a full-circle moment.

Chanel had hoped to invite 200 guests to creative director Virginie Viard’s first fashion show outside Paris, but a second French lockdown forced the brand to revise its plans.

Instead, it will unveil the collection online tonight at 7 p.m. CET, with a fashion show filmed in the castle’s ballroom on Tuesday. The shoot involved a cast and crew of 300 people, and precisely one VIP guest: Kristen Stewart, who will feature in ads for the collection photographed by Juergen Teller, marking his first campaign for Chanel.

“Really, the only difference with what we had planned initially is that there are no guests,” said Bruno Pavlovsky, president of fashion and president of Chanel SAS.

“Even if it’s a video, even if it’s not live, the result will be the same as a runway show,” he added. “We’ve tried to make sure that all the ingredients are there to create the same buzz.”

For the first time, the house has produced exclusive content that can be unlocked by invitation only. It includes photographs of the castle by Teller, which have also been compiled into a coffee-table book, as well as audio clips delving into the history of the place. Narrators include Keira Knightley in English, Penélope Cruz in Spanish and Anna Mouglalis in French.

Pavlovsky said it took guts to bring the collection to the storied setting of Chenonceau, so it seemed logical to commission Teller, known for his pared-back, seemingly improvised aesthetic. “He brought his edgy eye to the place,” he said.

Likewise, Viard was not overly reverential in her approach to the collection, created as a showcase for Chanel’s 38 specialized Métiers d’Art workshops. Lean black coats and jackets topped with ruff collars reeked of palace intrigue, while quilted leather vests and jackets with bouffant sleeves exuded the swagger of a Renaissance prince.

But the designer responded just as much to the fairy-tale aura of the castle, which straddles the Cher river and is surrounded by magnificent woodland and gardens. “It’s somewhere between an animated film and the swashbuckling B movies I used to watch as a child,” she said, citing musketeer epics and the kitschy 1964 classic “Angélique, Marquise des Anges.”

“The women in them were always quite sexy. I was also extremely inspired by the checkerboard floor in the ballroom, Catherine de’ Medici, Coco Chanel — it’s a mix of everything.”

Her sexy maidens were not afraid to don shaggy hunting vests and tweed jackets, slashed at the sides, over bare skin — the racy top halves balanced by ample skirts, including one in inky denim printed with a floral tapestry pattern.

And what about those itsy-bitsy tweed bodysuits? One version, in cream with gold braiding, was topped with a sweeping black coat. Another one, in black, was worn with nothing but bare legs and a lethal attitude, enhanced by the model’s charcoal-ringed eyes and wavy black hair.

On the opposite end of the spectrum, Viard tapped embroiderer Montex to create a Disney-like geometric castle motif in colorful rhinestones that popped on evening handbags and cummerbund belts, one of them cinching a swishy black satin skirt worn with a white ruffled shirt and a cute black cone hat with a veil, the kind usually found on kids’ princess costumes.

The mostly monochromatic palette was inspired by the former ladies of the house, as well as Coco Chanel’s own minimalist style. Diane de Poitiers, the mistress of King Henri II known for her beauty and love of hunting, famously wore only black and white. De’ Medici, Henri II’s politically astute wife, always wore black, occasionally set off with a white ruffled collar.

It was a favorite look of Coco’s, too, as witnessed by a memorable photograph of the designer by George Hoyningen-Huene. Viard paid homage to both by putting a graphic white collar on a pencil-straight black coat that flared out into an asymmetric hem, but she balanced out the more austere silhouettes with opulent tweeds and cozy knits in rich rusts and wintry grays.

“A lot of it is done on instinct,” said the designer, who has an encyclopedic knowledge of Chanel’s suppliers, gleaned over three decades as her predecessor Karl Lagerfeld’s right-hand woman.

Viard described spotting the leaf embroidery on a translucent white coat sleeve in the archives at Lesage, which also produced the dense red embroidery on the bodice of a dress shrouded in a black chiffon cape. Knitwear maker Barrie contributed sweaters with intarsia castle or flower motifs.

It was the wealth of regal details that truly impressed: the tiny pearls dotting an off-the-shoulder tweed dress; the discreet quilted pattern of interlocking Cs, topped with a crown, on an ivory skirt suit; trompe-l’oeil gold buttons and four-leaf clovers printed on a black velvet top — and enough bling to rival the crown jewels.

Stewart said she prepped for the experience by binge-watching old episodes of “Reign,” the CW show that fictionalized the life of Mary, Queen of Scots.

“I was learning about who’s lived here and who’s loved this place, and it’s shifted hands primarily between women. And I was just telling Virginie, it felt like the story was folding in on itself. The women who lived here before were really into art, and promoted a lot of creativity, and loved to be inspired and inspire other people to come create, and I was imagining who our characters were while watching the show,” she said.

“I’m always proud of her, but it felt very personal this time,” the off-duty star, wearing a black-and-white varsity jacket and a signature Chanel camellia pinned in her hair, told WWD.

Pavlovsy noted the Métiers d’Art collection, which is unique to Chanel, is also a commercial success. The last one flew off the shelves after Chanel was able to reopen its stores following the worldwide lockdowns of the first half of the year.

“Since July, when we launched the Métiers d’Art collection in stores, we’ve seen remarkable activity. Many weeks, our sales are up versus last year, so we’re very happy,” the executive said, noting that sales associates — or fashion advisers, in Chanel parlance — have been successfully engaging local customers in the absence of tourists.

“In every country, our local clientele is growing in the double digits,” he said. Still, the rebound won’t be enough to compensate for the losses in the first half, which earlier this year led Pavlovsky to predict a two-digit drop in sales in 2020 as a whole.

“We’re still hoping to do a bit better,” he said, noting that the cruise collection, presented online in June, has been posting “excellent” results since launching in stores on Nov. 17. Chanel has been testing different formats to amplify its recent collections, but Pavlovsky said that high digital scores were not enough.

“You musn’t get blinded by the figures. The scores can get really high, really fast,” he said. “It’s not just a question of numbers. The depth and quality of the impact we’re trying to create is just as important, and more difficult to measure.”

That’s why, despite the recent strategic partnership between Farfetch, Alibaba Group and Compagnie Financière Richemont to provide luxury brands with enhanced access to the Chinese market, Chanel is sticking by its decision not to sell fashion online.

Furthermore, after several years of spectacular flagship openings, Chanel plans to stabilize its network of 205 stores next year by focusing on renovations, though Pavlovsky insisted that plan was already in place before the coronavirus pandemic hit. The only major new store is set to bow in Miami’s Design District in December 2021.

In the rapidly growing Chinese market, Chanel plans to open one new store next year in Shenzhen, in addition to a shoe boutique in Beijing. It will also renovate its existing boutique in Hangzhou. “We continue to develop the brand, but at our own pace,” Pavlovsky said.

He’s confident the Métiers d’Art collection will also resonate with travel-deprived customers. “This château is so exceptional and unique that the decor of the château acts as the launchpad for the collection, which is equally superb,” he enthused.

Spare a thought for the models, who huddled between takes wrapped in gold foil survival blankets. The whole event was a tour de force, considering ongoing COVID-19 restrictions, though DJ Michel Gaubert chose an upbeat song title for the show finale: “They Told Us It Was Hard, but They Were Wrong.”