The online presentation for Dior's collection, featuring Kenny Scharf's cartoonish sci-fi paintings, was set in a galaxy far, far away. 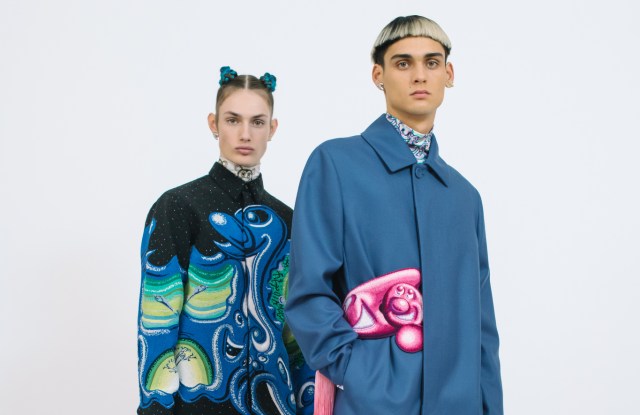 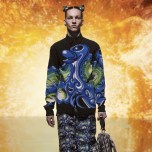 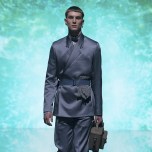 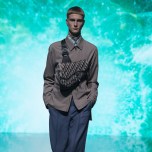 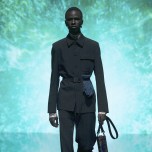 Kim Jones had planned to show his Dior pre-fall collection in Beijing this year. Faced with ongoing travel restrictions linked to the coronavirus pandemic, he switched to Plan B: outer space.

His online show featured models walking against an intergalactic backdrop conceived by Thomas Vanz, a French director known for his spectacular renderings of deep space, against a looping soundtrack of Deee-lite. The clothes were no less trippy: Jones tapped Kenny Scharf, whose cartoon-like paintings are steeped in sci-fi, to lend his colorful touch to the line.

“I wanted to do something quite fun and poppy, because everything’s so down at the moment,” Jones explained during a flying visit to Paris in October.

While the visuals provided a much needed escape from COVID-19 fatigue, the collection was grounded in the comfort dressing that has become de rigueur for legions of people working and socializing from home.

Jones has made a strong case for tailoring since he joined Dior as artistic director of men’s collections, but he loosened up the silhouette with belted, robe-like jackets and coats, pajama-style jacquard pants and printed mink slippers.

Pants came in a relaxed fit inspired by military uniforms, which also fed through into double-breasted jackets with cargo pockets and epaulets, and Harrington jackets in a variety of fabrics and textures, including a corduroy-like laser-cut mink.

With their hair chopped into brightly dyed bowl cuts or tied back into braided mini buns, the models channeled a Nineties club-kid attitude, underscored by the shiny and holographic textures on clothes interspersed with Scharf’s one-eyed monsters and psychedelic landscapes in Day-Glo hues.

Jones caught up with gallerist Tony Shafrazi in New York City just before lockdown, which got him thinking about the mythic downtown art scene of the Eighties, when Scharf, Keith Haring and Jean-Michel Basquiat brought street art into art galleries and museums.

He has made high-profile collaborations with artists a central feature of his design process at Dior, spawning a new form of collectible art: made-to-order pieces requiring haute couture-grade craftsmanship.

The French luxury house enlisted a specialized workshop in China to embroider Scharf’s 1984 painting “When Worlds Collide” on a shirt, using a seed stitch technique that dates back to the third-century Han dynasty. The top required 7,000 hours of work over 95 days.

A Kenny Scharf design is embroidered on a shirt for the Dior pre-fall men’s collection.  Courtesy of Dior

The same technique was used for wavy embroidered sash belts, inspired by Scharf’s more recent paintings “LA Blobz” and “Koz,” that added an unexpected pop of fantasy to items like a plain khaki suit.

Jones said the pieces were not just for show, as many buyers are drawn to their cult status. “People want things that are special,” he said. “Even if they don’t wear them, they have them. You can frame it, you can put it on a wall.”

Ordinarily a compulsive traveler, Jones loves to bring back examples of local craftsmanship to add to his vast clothing archive. He enlisted his friend, former Shanghai Tang designer Victoria Tang-Owen, to help him source the right artisans in China.

“I just wanted to respect the idea of looking at craftsmanship from all around the world, because people talk about ‘made in China’ in a negative way, but actually the craftsmanship they have is really full-on,” he said.

In lieu of a runway show, Dior staged a viewing party in Beijing in the presence of local brand ambassadors. Among the covetable merch aimed at the thriving Chinese market were tops featuring Scharf’s interpretations of Chinese Zodiac signs, and jade jewelry designed by Yoon Ahn.

Jones reported that Gen Z teens have developed a taste for vintage ladies’ handbags, so there were fresh versions of the Dior Saddle bag in neon pink and green crocodile leather. “We just wanted the playfulness of trying to get out of this, where we are at the moment,” he said.

He noted that Christian Dior founded the label in 1946, as Europe lay in ruins from World War II. Overcoming adversity is in the brand’s DNA, so to speak. Scharf is also a survivor: whereas Haring and Basquiat succumbed to AIDS and drugs, respectively, he is still spray-painting murals at the age of 62 — a timely reminder that life goes on.