Resort season is in full swing, and in New York on Wednesday, Oscar de la Renta rolled out a slew of punchy, Popsicle-bright looks that kept his customers...

IsSixWeeksAfterFashionWeek = false
By WWD Staff on May 15, 2008 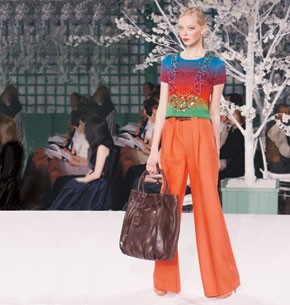 Resort season is in full swing, and in New York on Wednesday, Oscar de la Renta rolled out a slew of punchy, Popsicle-bright looks that kept his customers — including the global contingent that tuned in on YouTube — in mind. To wit, this ombré sweater and bold pants.

Why go for broke for a resort presentation? As Oscar de la Renta sees it,

“There is no A collection and B collection. Everything has to be your best effort.” And he certainly got top honors for transforming the church on Park Avenue that’s become his go-to show venue into a pristine garden of painted white cherry trees and green latticework. It was a beautiful set, indeed, but the clothes stole the show. Smart suits, vibrant silk separates, extravagant evening gowns — there was something for every occasion, all of it very pretty and appealingly wearable. If there was a pitfall — and Oscar hates to hear it — it was that his 66-look lineup went on a tad too long.

Of course, going big is all a part of de la Renta’s plan. “It’s a game that is changing,” he said. Thus, he considers such a pricy, expansive presentation well worth the expense, not a cent of which was spent on wrangling celebrities — there weren’t any. “I prefer to see a picture of my dress in WWD, not a picture of Jennifer Lopez,” he said. The whole shebang was intended to impress not just his immediate audience of editors and retailers, but the global contingent he planned to reach within the hour via YouTube. And he had his eye on one viewer in particular, his biggest Russian customer, who is also his partner in his Moscow store, set to open this fall.

“In a half hour, she will place an order for over $1 million,” he explained, adding that another 500 videos were being sent to his best retailers all over the world. “They are not here,” he said. “But they can participate.” Now that’s e-commerce.