Nature meets urbanization. That’s the premise behind the designer’s resort collection, which was inspired by her recent move from Los Angeles to New York. 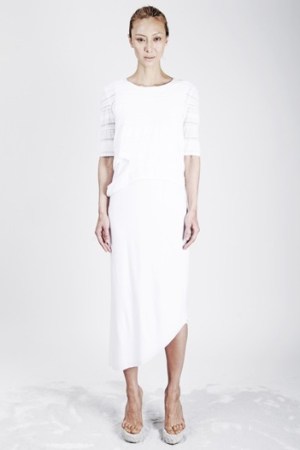 Nature meets urbanization. That’s the premise behind Kimberly Ovitz’s resort collection, which was inspired by her recent move from Los Angeles to New York. “I’m missing the beach,” quipped Ovitz, referring to the hazy sand-dune prints on an easy tank and dress, the latter with a twisted drape at its front. The city elements popped up in the hinge-like details on tops and shorts — “they’re based off a door in New York” — while the seaside vibe lent the lineup its organic touches, best seen in the spliced textures and patterns on slouchy pullovers and shirts. As for Ovitz’s chic spotlight on knitwear — terrific intarsia T-shirts and webby cable sweaters done in cool, off-kilter silhouettes — there’s a practical reason behind it. “I designed this collection while moving,” she said, “and did predominately knits since I didn’t have a sample room.”