More dressed-up looks came in the form of structured silk jacquard dresses that were given a jolt of modernity. 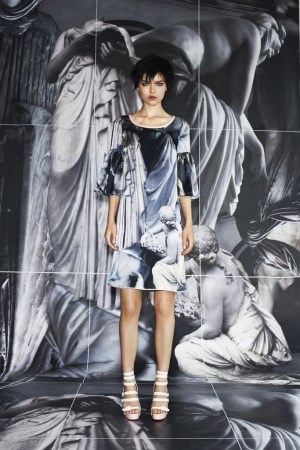 Giles Deacon’s edgily pretty collection was a riff on what he called “playful sophistication.” Inspired by a trip to Yorkshire’s Castle Howard, the setting for the TV and film adaptations of Evelyn Waugh’s novel “Brideshead Revisited,” Deacon said he was thinking about Waugh’s stylish, gilded aristocrats. That translated into cartoonish illustrations of women, which Deacon drew on his iPad and rendered as digital prints on silk T-shirts and unstructured evening dresses. More dressed-up looks came in the form of structured silk jacquard dresses that were given a jolt of modernity when done in shades of shimmery peach and mint green. Deacon’s illustrations also appeared in miniature, shown on patterns woven into silk jacquard and as laser-cut silhouettes sprinkled across the front of silk faille A-line dresses.