The designer played with the idea of “graphic athleticism,” mixing up color, print and texture for his daywear-oriented collection. 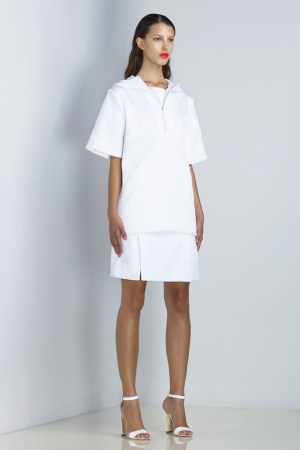 Richard Nicoll played with the idea of “graphic athleticism,” mixing up color, print and texture for his daywear-oriented collection. A white, floor-length pique gown took its cue from the classic tennis dress, a breezy tailored suit was made from men’s striped shirting fabric and graphic prints with a Pucci vibe were used for silk separates. Nicoll also turned to Stephen Walters and Sons — the British silk weaving firm founded in 1720 — for vintage tie fabrics, which he worked into silk shifts, giving them added texture and embellishment.