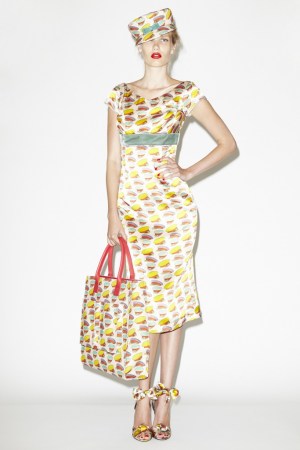 L’Wren Scott’s first resort collection, titled Propaganda, was a carefully considered outing. To her, the clothes should “first, be colorful, and also be something that’s not already in your wardrobe” — a philosophy that led to a print-driven lineup of nine original, hand-done patterns with names like The Bomb and Why Knot. Taken at face value, the motifs infused Scott’s signature retro Forties polish — pencil skirts, silk halters, cropped cardigans — with terrific color and whimsy, which Scott’s loyalists should find plenty distinctive. For those interested in the designer’s political positions, each print contained a message: The Bomb was a motif Scott called her “weapon of mass destruction,” and Why Knot, a pattern made of Chinese peace knots.