The lineup was based on the house standards of simplicity and elegance, with several major jolts of color. 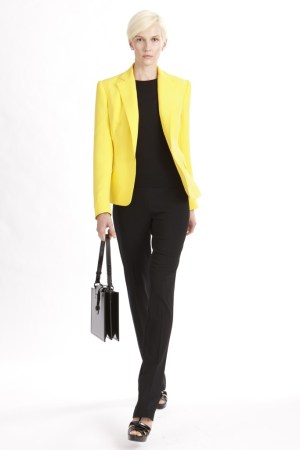 After being absent from the pre-collection schedule for years, Ralph Lauren decided that this season called for a little extra love and excitement. Thus, the impromptu presentation staged Monday at his Seventh Avenue showroom. “Because of the mood in Europe, I thought it was time to do something happy and strong,” said Lauren, before introducing the lineup based on the house standards of simplicity and elegance, with several major jolts of color. A revisitation of his classics — fringed suede jackets, flared pants, sleek sheaths and safari styles — were updated in long, lean lines that served as a blank canvas for bold tones like magenta, yellow and chartreuse, as well as a plucky multicolored plaid. Worn head-to-toe, as in a yellow leather motorcycle jacket (which, Lauren noted, was a hot number at retail in pink) and matching skirt, the clothes radiated optimism. To temper the palette, the silhouettes were also worked in more muted shades of khakis and green, while a range of sharp bags were shown in neutrals. The signature Ricky, for example, was updated in matte black. Still, Lauren’s main message was all about brights. As he said, “When you have color, business gets better.”