Karl Lagerfeld brought a jolt of punk-tinged fashion to the Palace of Versailles, parading his cruise collection in its sprawling gardens.

IsSixWeeksAfterFashionWeek = false
By Miles Socha and Katya Foreman and Joelle Diderich on May 14, 2012 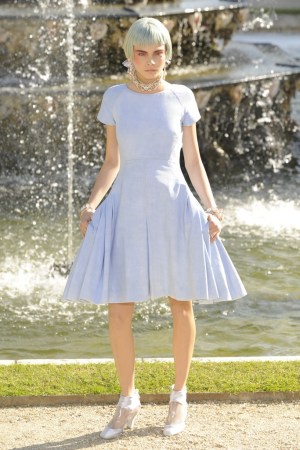 VERSAILLES, France — Karl Lagerfeld brought a jolt of punk-tinged fashion to the Palace of Versailles on Monday, parading Chanel’s cruise collection in a fountain-festooned corner of its sprawling gardens.

“It’s Coco rock, not rococo,” Lagerfeld declared during a preview at Chanel’s Rue Cambon studios on Sunday, his facility with wordplay running full throttle as models entered one by one, their feet shod in platform brothel creepers, their heads capped with blunt wigs in black or candy-floss colors. Their clothes winked to the days of Marie Antoinette — skirts jutting out at the sides as if there were panniers underneath, sleeves flaring at the shoulder or wrist, but were often rendered in crisp and light fabrics, including lots of denim.

“Put your hands in your pockets,” Lagerfeld instructed one model in a flaring minidress, eager to break any semblance of a period look.

“It’s serious revolt,” he teased. “It’s not at all 18th century. It’s very rock. You can hardly recognize the girls.”

At Versailles, Lagerfeld picked a dazzling setting for his latest big-budget show, seating some 400 guests in trompe-l’oeil garden tents as the late-day sun sliced through the trees and glinted off spurts of water, the ornate buttons studding the clothes and the beribboned jewels that encircled models’ throats.

They whisked down the gravel paths to a thumping rap soundtrack. “Live fast, die young, bad girls do it well,” went the M.I.A. ditty.

Quirkier looks included knickerbockers, a nod to the short pants of the revolutionary period that ultimately yielded to pantaloons. One pair came in pink, topped with a bomber jacket blending a gold filigree fabric with meringuelike ruffles in sugary shades. “You wear that to motorcycle in the park of Versailles,” the designer explained during the preview.

Lagerfeld said he touched on 18th-century elements early in his Chanel career, as did the founder: She attended a masquerade ball in 1937 dressed like a figure from a Watteau painting, later reworking elements into some of her designs.

“With one little thing like this, I make a collection,” Lagerfeld said, grinning slyly.

Lagerfeld has transformed cruise — one of Chanel’s most crucial deliveries — into a movable fashion feast, staging elaborate, open-air shows in such locales as Venice, Los Angeles and, more recently, Cap d’Antibes and Saint-Tropez.

“As we are very, very busy, I liked the idea of not going too far,” said Lagerfeld, who recently jetted to Tokyo to reprise his summer couture show. “I always liked Versailles. I think more French you cannot do.”

Few people know the venue better than Lagerfeld, who has photographed the gardens extensively, staged exhibitions at the palace and possesses enough knowledge about its history to rival academics. “I could work as a guide at Versailles,” he noted.

Lagerfeld said he also thought of Deauville, another picturesque and evocative place in France, but he will probably head there next year as it marks the centenary of Chanel’s shop there. “My idea is to hire a train, have dinner on the train, do the show in a ballroom and go back at night,” he said.

The designer said cruise is one of six ready-to-wear collections he does for Chanel, as “nothing is more boring than a shop where you have the same thing for six months.”

Indicative of the delivery’s importance, Lagerfeld plans to shoot a dedicated advertising campaign for cruise in the coming days. (He just wrapped a Chanel eyewear campaign featuring French actress and director Maïwenn, who also took in the show.)

“Cruise has become for us one of the most important collections in the boutique,” he said, noting that the delivery is seen as vital across all regions.

While voicing caution given ongoing economic turmoil in many markets, he noted that Chanel’s business continues to be “quite good,” advancing at a double-digit pace. He said a slate of shop openings weighted toward the end of the year should help the company “maintain this level of growth” despite the global economic situation.