Ennio Capasa had references from the Nineties such as lingerie details, biker jackets and men’s wear checks. 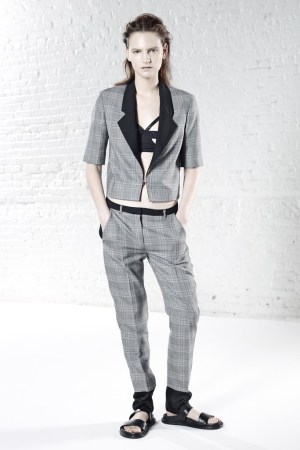 With a nod to the minimal aesthetic of the Nineties and a “new wave” influence, Ennio Capasa turned out a clean and modern lineup for Costume National. The designer had references from that era such as lingerie details, biker jackets and men’s wear checks, which were all rendered in a graphic way, i.e. mostly black and white, and several prints including a “lettering” motif from artist Kushida Shinichi, a microdot as well as a bamboo pattern. A shot of red added a pop to the starker looks. Standouts included softly tailored blazers, boyish trousers, asymmetrical dresses and bustier-inspired tops.