The newbie designer from London showed a cool mix of summery basics and specialty pieces inspired by Asian expats and surf culture. 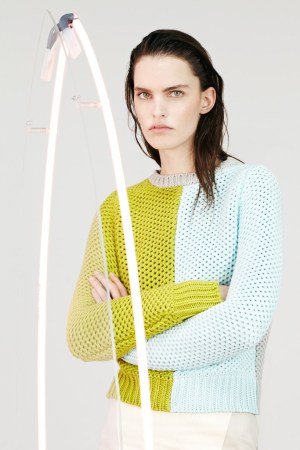 Alexander Lewis, a newbie from London, showed his resort collection for the first time in New York Monday. In an interesting and forward-thinking move for a young designer, Lewis only works in pre-collections, his logic being that most retailers spend between 60 and 80 percent of their budget during pre-seasons. “I have a better chance of getting a slice of the 80 percent than the 15 percent during the main season,” he said. His resort collection was a cool mix of summery basics and specialty pieces inspired by Asian expats in Brazil, Sydney, Costa Rica and Southern California and surf culture in Asia. Standouts included color-blocked sweaters hand-knitted in Wales and a blue jacquard skirt with a front panel shaped to suggest a surf board.