Lauren stressed that unlike the cruise of old, this lineup offered more than just some fill-in merch. 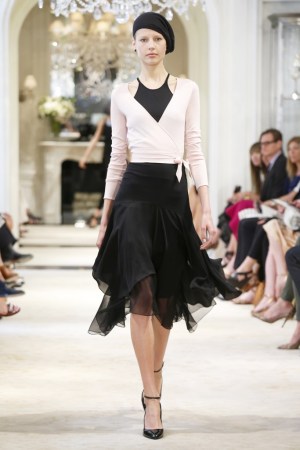 Two shows —one for retailers, the other, editors. Printed invites with special seating cards arrived by hand the day before. The second floor of Ralph Lauren’s women’s store, housed in its own beautiful Madison Avenue mansion, became an intimate salon for the occasion, the sun streaming through the French windows and precise arrangements of white roses and pink peonies filling the space with a sense of spring.

Lauren was clearly making a statement about the current market, which other people call resort or cruise, names he considers antiquated given the realities of the season. “Cruise used to be sailor pants and bathing suits, and it’s become a much more important season,” Lauren said, preshow. “It’s not limited to cruise, so I don’t call it cruise anymore. I call it ‘Pre.’”

Whatever his chosen handle, the full-on runway show was new for the market; in the past, Lauren had shown cruise sporadically, in showroom appointments. Here he set the bar high with an elegant production and a lovely, tightly edited selection of clothes.

“I wanted to show more of the things that sometimes don’t get shown,” he explained of his decision to join the growing ranks of designers who stage small shows for resort. “Sometimes, we have collections that we don’t really promote and they sort of dissipate, and we had a lot of things in there that we really liked, and things that were ahead of the moment.”

With retail asking for more deliveries, he felt the time was right to take the leap. “I have stores where I’m the only product, so I have to fill the stores and keep them stimulated,” he said. “It’s a process that I’ve learned because I have my own stores. So, designing these collections, I’m hearing the voice of the retailer, whether they work with you or for: ‘We want more.’”

Lauren stressed that unlike the cruise of old, this lineup offered more than just some fill-in merch. “It’s a total concept and well thought out,” he said. “We’ve done presentations before, and I think you sort of miss the story. This is a story.”

The color palette — black, white, lavender and pink — underscored that notion. His first look — a pretty combination of a pink wrap cashmere top teamed with a silk georgette skirt — loosely read “ballerina.” So did much of the rest of the lineup, like the transparent silk and leather panel cape with a camisole and leggings. Some of the looks featured a graphic, black and white Deco print, like a pleated summer dress with leather strips that had a refreshing sense of movement. A tote with the designer’s name in bold, cursive script added a touch of whimsy to a floor-length black dress with a striped cape.

If there was any pressure about adding another runway show, Lauren didn’t show it. “I thought about it for a bit, but I’m glad I did it,” he said. “I think it elevated the story and elevated the next season. And I think it’s part of the business that’s not going to go away.”