The women’s movement in the Seventies, specifically the idea of having it all, was Veronica Miele Beard and Veronica Swanson Beard’s inspiration. 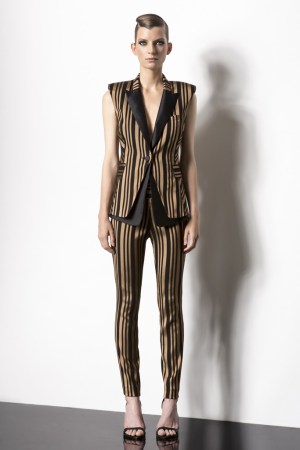 The women’s movement in the Seventies, specifically the idea of having it all, was Veronica Miele Beard and Veronica Swanson Beard’s inspiration for resort — understandably so. The sisters-in-law, who are working mothers with eight children between them, launched their line three years ago with the idea of a blazer and a dickey and have since expanded into a full collection. With images of Diane von Furstenberg and Ali MacGraw and Helmut Newton photos in mind, they tweaked their blazers, strengthening the shoulders and nipping the waists. There were high-wasted trousers and a twist on the tuxedo as a jumpsuit and jacket. For a more modern take on the power woman, the designers offered bonded leather and Neoprene cocoon jackets, a suit in coated graphic tweed and cropped trench and a neat Windbreaker hybrid.