“It’s a bit of Chanel’s history and a bit of influence from this part of the world,” is how Karl Lagerfeld described the collection, shown in Singapore. 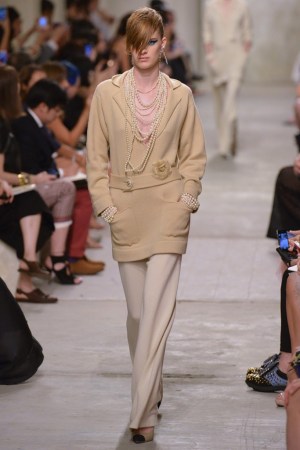 SINGAPORE — To some, this country is the quintessential millionaire’s playground: a city-state of vertigo-inducing skyscrapers, fast cars and packed nightclubs.

The tiny island off mainland Asia is all that, but every now and then, little emblems of its colonial past — English-speaking, multiethnic neighborhoods and roads named after long-forgotten British administrators — crop up, serving as reminders that Singapore was once an eastern jewel in the British crown.

Karl Lagerfeld’s sensitivity to that sense of history was seen Wednesday night when guests like Cara Delevingne and Anna Mouglalis flocked to the courtyard of the Raffles Hotel, a 19th-century establishment that W. Somerset Maugham had frequented, for the first screening of Lagerfeld’s short film “Once Upon a Time…”

That appreciation of the past could be also be inferred from Lagerfeld’s choice of Loewen Cluster, a former nutmeg plantation located just minutes away from the city center, to unveil Chanel’s latest cruise collection on Thursday evening. The venue was on a hilly plain bordering a retired military camp that gentrification turned into a dining destination, and entry was via a gravel path that opened into a rainforest clearing housing two thatch-roofed huts doing double duty as bars, and a colonial-style black-and-white bungalow with multiple wings.

The backdrop of the show was a semi-run-down wing of the manor, which came with stark concrete floors and walls with peeling paint, though warm yellow lighting gave it a pleasant hue. “I like the idea that it’s not impeccable,” Lagerfeld said. “There’s a romantic charm that new things cannot always have. It’s not [just] about the historical details, but also the mood.”

There was also the presence of history in the clothes. “It’s a bit of Chanel’s history and a bit of influence from this part of the world,” said Lagerfeld, though he said that his research had been primarily based on instinct. “You don’t get into the details, you reinvent the details.”

By doing so, Lagerfeld provided a sophisticated take on Southeast Asia and its rich past. Tropical accents came via raffia dresses and airy, loose-legged cream trousers and a dress with stained black-and-white feathers on the bust, which were mixed with neutral grays, beiges and whites. And yes, those loose chains of pearls were cinched around waists and wrists.

Seemingly popular with the crowd were cricket bat-wielding, shin pad-wearing models decked up in the public schoolboy uniform of collared shirts, skinny ties and pullovers.

Certain jackets came with few visible buttons, a look that may have been inspired by a photo Lagerfeld saw of a Southeast Asian fisherman in 1880. “This man has a Chanel jacket,” he quipped.

Takes out of Chanel’s history included black lace jackets and jacquard sweaters with exposed shoulders. Boxy jackets in various lengths made several appearances, sometimes with models touting handbags that resembled oversize bottles of Chanel No. 5. A navy bathing suit with yellow trimmings recalled the beaches of southern France. Lagerfeld said he had designed the midseason collection to be worn anywhere in the world, but he allowed his imagination to run wild in the form of delicate dresses and kebayalike blouses that were heavily embellished from the neck downward.

The fashion house had put guests like Dakota Fanning and Carine Roitfeld on an 18-hour flight to Singapore shortly after the Met Gala in New York, but they showed little sign of jet lag at the show. “Singapore’s a nice change from New York,” said Fanning, who was only planning to spend 24 hours in the city. “I came because I’m so excited to see Karl and all of his work.”

“It was black-and-white, old-school Chanel and yet somehow still new,” said Rinko Kikuchi, who stars in Guillermo del Toro’s upcoming science-fiction flick “Pacific Rim.” Prompted about being the rare Asian face to front a Hollywood movie, the Japanese actress said, “Few Asians in U.S. [movies] get main roles, [so I hope] all the Asian audiences will love the film too.”

Despite recent tabloid headlines in her native Britain about a mysterious bag of white powder that reportedly dropped out of her bag, Delevingne was in a jovial mood. “The collection was horrible…I’m joking,” said Delevingne, who wore a baseball cap and was happily posing for photos with admirers. Chanel’s latest face said that though her schedule for Friday was packed with shoots for the fashion house and i-D magazine, she was hoping to shop in the glitzy Marina Bay Sands casino-resort. “People here have been so kind and sweet to me,” she said.

Its population’s manners aside, Pavlovsky, the Chanel president, said that tropical Singapore was an ideal spot to launch the cruise collection. In Asia, “where there are more high temperatures than low temperatures, we have space to grow,” he said, noting that many Australasian climes remain warm from October through June, when the collection is in stores.

Pressed about China, where slowing growth has been coupled with a government-driven clampdown on conspicuous consumption, he said that any blip would not affect Chanel’s bid to “still be there in 50 years.”
“China is a new business for us and we only have 10 boutiques there,” he said, adding that Chanel had only begun opening stores in second-tier cities like Shenyang in the last two years.

The executive said that the fashion house would be moving to encourage customers who had become familiar with the brand through accessories to purchase clothing, which typically commands higher prices. “We have a fashion spirit and don’t want to sell only accessories,” he said. “So we are communicating [reasons to purchase] ready-to-wear to customers. It is a bit more expensive, but there are a lot of people in China who can afford it.”

“I cannot communicate any figures,” he added, “but I am sure we are [already] number one in ready-to-wear luxury sales in China.”