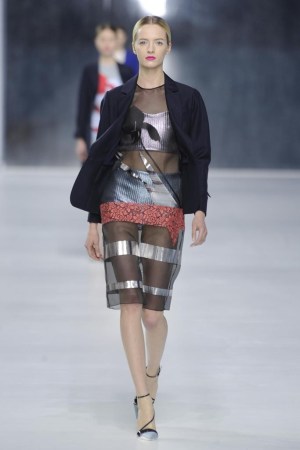 Dior renewed its long-standing love affair with Monaco by staging a fashion show for its resort 2014 collection in the tiny principality on Saturday night.

The event took place in a specially constructed white box jutting out over the port, affording guests a spectacular Mediterranean Sea backdrop for a collection that melded athletic ease with subtle eroticism. The initial idea was to set off the clothes — in shades like lemon, cobalt and blush pink — against a bright blue backdrop, but the skies were resolutely uncooperative and a steady rain fell throughout the day and evening.

Attendants bearing umbrellas printed with the slogan “It never rains in Monte-Carlo” shielded guests, including Marion Cotillard and Jessica Biel, as they left the Hôtel de Paris for the show venue. Other celebrities in attendance included Liv Tyler, Ruth Wilson and Ana Girardot. The crowd rose to its feet — as royal protocol requires — upon the arrival of Prince Albert and Princess Charlene of Monaco, accompanied by Prince Albert’s nephew, Andrea Casiraghi, and his fiancée, Tatiana Santo Domingo.

In the end, the dark clouds and slate blue sea were a dramatic foil to the creations of Dior artistic director Raf Simons, who expressed a more playful side with loose constructions and an abundance of lace. “I originally wanted to start with the clichés of what we all think about when we think about cruise, but then I also wanted to bring a new materialization and work with fabrics that I am not used to,” he said. Simons noted it was his first time using lace, a material he has shunned in the past. “I thought it’s kind of old, and too romantic and too fragile. And suddenly I thought, it’s a challenge to make it modern and edgy and kind of futuristic.”

The fabric was worked into ultralightweight versions of the house’s iconic Bar jacket, and bonded in horizontal stripes on sheer dresses that revealed glimpses of brightly colored silk bras and retro-style lamé briefs. Pantsuits were revved up with three lace bands running down the side of the leg, while airy sundresses and sinuous evening gowns came with curved racer stripes that Simons said were inspired by the high-octane universe of cars. Biker jacket zippers were worked into coatdresses and evening gowns, like a navy dress with an asymmetric hem and pleats flowing over one hip.

After the austere tailoring of his first ready-to-wear seasons at the house, Simons brought a new sense of fluidity to his vision for Dior, and steered his experiments with pattern and color in a joyful direction. “We want to bring a lot of dynamism and a lot of freedom,” he said. “As you could see also in the eveningwear, there was a lot of flare and ease. Nothing is restricted anymore.”

Princess Charlene, a former South African Olympic swimmer, wore a customized version of look number 58, an evening dress with multicolored panels, to a postshow cocktail reception she and Prince Albert hosted at the Oceanographic Museum. By inviting Dior to show in Monaco, Princess Charlene perpetuated a link that dates back to 1956, when the actress Grace Kelly wore a white satin Dior gown at a ball celebrating her engagement to Prince Rainier of Monaco. As Princess Grace of Monaco, she would go on to wear Dior on countless occasions. A selection of her wardrobe, alongside models from Dior’s own archives, was on display at the cocktail as well as more recent outfits belonging to Princess Charlene — including the white-and-gold sequined dress she wore to the Red Cross Ball last year.

“This is only a small portion of the dresses, which have been perfectly preserved by the palace,” noted Christian Dior chief executive officer Sidney Toledano. The executive said showing resort in Monaco opened a new chapter for the label, which now plans to take this annual collection abroad regularly after sporadic forays since 2006 in New York and Shanghai. “For us, this is an extremely important collection — as important as the October ready-to-wear collection. For the designer, showing on a catwalk is absolutely important,” he said. “Today, we are in Monaco, but the world is open.”