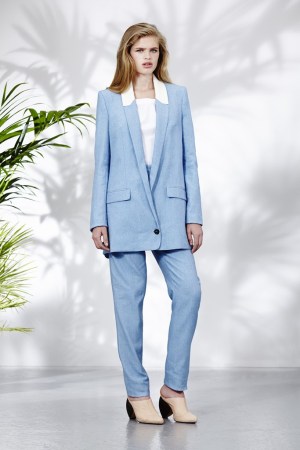 Hussein Chalayan riffed on seaside leisure for resort. “The anticipation, the conversations, sharing a drink,” said Chalayan. “I was looking at that crossover between life on the beach in a daily way.” Specifically, he zeroed in on the idea of a towel wrapped around you after a swim, working the clever concept with wearable ease. A white blazer was gently pleated and pulled around the body in the front; a gauzy white camisole gave the impression of a bikini worn under a towel. More colorful looks came in an abstract photo print of a hazy beach scene.