The substantial lineup offered a variety of looks within Puglisi's specific point of view. 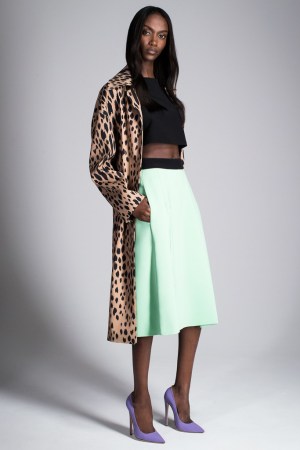 Fausto Puglisi had a lot on his mind going into resort. He does not lack for inspiration but, rather, how to control and streamline his surge of ideas, which in this case spanned Jackie Kennedy in Valentino couture and Andre Agassi at the height of his Nineties tennis stardom. Then there was Coachella, Miami, gladiators during the Roman Empire and classic bourgeois fare. On top of all that, this was the first collection he produced with new licensing partner Gilmar.

Puglisi juggled it all, yielding a substantial lineup that offered a variety of looks within his specific point of view. “There is a big connection between the pleats of a gladiator and the pleats of a tennis player,” said Puglisi, connecting the dots between short, apronlike dresses with knife pleat skirts and longer, more sporty versions. The Jackie Kennedy moment came through in A-line duchesse satin skirts, looks that have become expected from Puglisi, likewise black leather perfectos and bleached-out denim. What felt fresh were his dresses in graphic pajama prints and midi-length skirts that captured his idea of bourgeois. In Fausto’s world, that means a zebra print pony hair skirt.