The designer noted that his goal this season was to “make sportswear that is both casual and glamorous.” 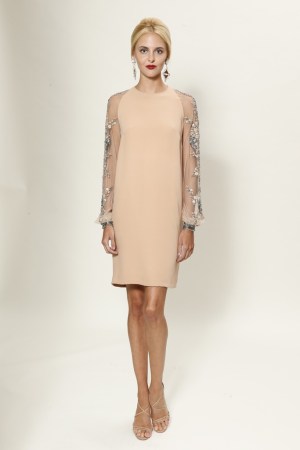 At the request of his retailers, Naeem Khan created a 95-piece resort collection — twice the size of last year’s. His slender gowns, sheaths and kaftans (the latter done especially for his Middle East clientele) were rich as always with allover hand-embroidered embellishment. Khan also added fresh surface interest via laser-cut leather flowers on strapless tulle gowns.

Still, the designer noted that his goal this season was to “make sportswear that is both casual and glamorous.” To that end, there were Bermudas and pleated shorts in white silk crepe shown with beaded T-shirts and pullovers, some in stripes and others in a geometric pattern. When it came to these summery looks, Khan said it’s Palm Beach, Fla., that he had in mind.