The show played as a treatise on modernist French chic tinged with Belgian iconoclasm delivered with an American homage and designed for a global clientele. 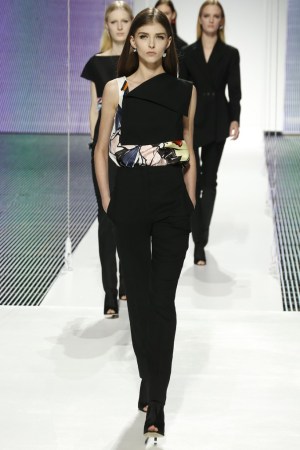 Cruise 2015 set sail — or more correctly, ferried — into Brooklyn on Wednesday night. Captained by Raf Simons and the house of Dior, it was an impressive trip.

The show played as a treatise on modernist French chic tinged with Belgian iconoclasm delivered with an American homage and designed for a global clientele. To that end, Dior flew in 120 editors from countries including Japan, India, Russia, Dubai, the U.K. and Germany, entertaining them with dinners at Crown and Indochine and, in between, lunch at the recently resuscitated Gotham icon Tavern on the Green.

Most of the thousand-or-so guests took chartered ferries from the East River pier at 35th Street to the Navy Yard. Among the celebrity types who joined (for the show, they traveled the chauffeured land-and-bridge route): Rihanna, Margot Robbie, Maggie Gyllenhaal, Nicola Peltz, Leelee Sobieski, Ruth Wilson, Marion Cotillard, Allison Williams, Helena Christensen and Linda Evangelista. There was a healthy showing of Simons’ art-world friends as well — Sterling Ruby, Anne Collier and Frances Stark among them. Last but not least, clients, many flown in from around the U.S., made up the largest single constituency.

They all settled in for a big, fast-paced show — 66 looks — staged to make the most of its locale. The emergent perspective of the New York skyline as the ferry distances itself from Manhattan is stunning; ditto that from outside the Navy Yard’s Duggal Greenhouse. Inside the building, however, the windows are too high for visitors to take optical advantage. Except visitors on the Dior dime. The house enlisted Bureau Betak to construct an entire floor five meters (16.4 feet) north of the ground floor, and accessible via multiple staircases, putting guests at window level. Across from the windowed expanse, a 29.5-foot-high mirrored wall reflected a floor of thousands of LED lights across which floated giant projections of 23 patterned Dior scarves, including an archival riff on the American flag. The two made for mesmerizing viewing.

The scarves provided a major motif, derived from Simons’ interest in the carré designed by Christian Dior and sprung from the house founder’s love of flowers.

“I wanted to deal with [the carré] in a different way,” Simons said during a preview the day before. “Not as a styling element around the neck. I wanted to see how can we use that as an element [of design], and see how I could deal with prints and flowers in a different way.” He also aimed “to touch on elements of Dior history but also link to what I feel when I am in New York.”

Examining the archives, he was attracted to both literal florals and abstractions. He commissioned some reissues, while he and his staff hand-painted their own bold interpretations. He then made deft use of the theme, invoking its artful aspects to powerful effect.

He opened with a pair of sleek black pants looks, their tops crafted from trouser-matching midriffs attached to scarves. Sometimes he joined two scarves into airy skirts intended to be “very, very free,” or worked the airy silks into breezy tops over sleek black skirts.

He was drawn as well to the geometry of the scarf, “the idea of having a simple rectangle to see what you can do with it.” His series of dresses made from multiple lace squares in various sizes registered both feminine and precise.

Simons impressed with his tailoring, particularly his approach to the Bar. “I can not think about collection and not have it in,” he said. But rather than a retro fest, his felt new and fresh, a jacket cut with architectural fervor and falling to a scarf point in front, or sculpted tweed coats with an air of casual currency. Throughout, the fabrics were superb: lavish embroideries; audacious combinations of florals and stripes; hand-wrought raffias; tightly woven tweeds.

As for the American angle, the inclination of major houses to take their pre-shows on the road started as a smart way to focus attention on resort/cruise while creating excitement during what were once considered fashion’s downtimes. Then as now, the city sites were based on more than whimsy. In 2006, Dior showed cruise in New York for the first time, and continued doing so through 2009, though never on this scale; those shows had far more modest goals in terms of production and reach. In 2010 the house went the “new market” route and showed in Shanghai, before reverting to quiet showroom appointments.

This return to New York worked as both a global exhibition of strength and an overt expression of Dior’s dedication to the U.S. market as other markets around the world have exploded and, in some instances, cooled. Simons noted the deep roots between the U.S. and the house of Dior, as well as client reaction since his arrival. “I’m here for two years and the response from the American women is [strong],” he said. “New York has always been a city of energy and strength. I walk through the city and I see all these women and I think strength and energy and conviction.”

Beginning today, Simons will see some other sights as well. Ensconced in his studio transplanted from Paris to the LVMH Tower on 57th Street in advance of the show, Simons didn’t make it to the Met ball on Monday. “You can’t go for an hour. I had to work,” he explained. But as of last night he was off-duty. “I’m very happy. Thursday is the art fair [Frieze] and on Friday Sterling [Ruby] has an opening. So it’s kind of fun, because after Wednesday, I’m free.”