Alber Elbaz produced a lineup rich in options, yet all with the soigné allure and rigorous cutting that have defined his era at the French house. 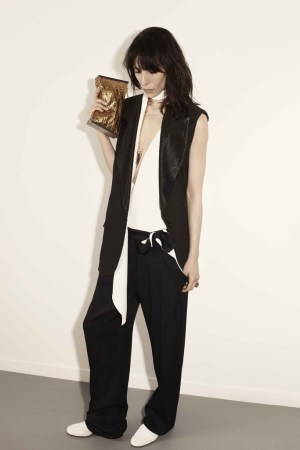 “I’m not an editor, I’m just a designer” is how Alber Elbaz explained his anything-goes resort collection for Lanvin. Day, evening, long, short, colorful, neutral, downtown, uptown — or even midtown: “You name it, we’ve got it,” he said at a preview in Paris last week (he presented the lineup in New York Monday). Indeed, Elbaz produced a lineup rich in options, yet all with the soigné allure and rigorous cutting that have defined his era at the French house, marking its 125th anniversary this year.

There was a faint Seventies, glam-rock vibe to his languid tuxedos, maxidresses with plunging V-necklines and slim scarves caught at the throat with a fabric flower. Dry, crepelike fabrics were worked throughout, from pert tunic-and-pants combos to paneled shift dresses. For cocktail and evening, Elbaz riffed on frothy lace and demure tea dresses.

Israeli artist Michal Rovner, paying the designer an impromptu visit in Paris, marveled at the scale and variety of his creative output — and Elbaz couldn’t resist throwing out a food metaphor: “It’s like a big buffet on a cruise ship.”