This surf-and-turf collection was inspired by the rugged beaches of Cornwall. 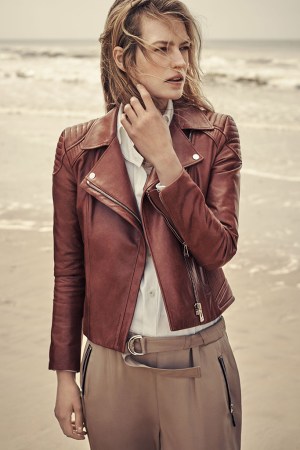 This surf-and-turf collection was inspired by the rugged beaches of Cornwall and the motorbike culture embedded in Belstaff’s DNA, with Delphine Ninous, vice president of women’s design, rejiggering a host of men’s wear classics — and athletic staples — to suit her woman.

“I was thinking about superadventurous, free-spirited women and the freedom of a bike and a surfboard. They’re clothes with a relaxed attitude— and a modern hipster vibe,” said the French designer, who joined the brand last year.

She put a feminine spin on Belstaff’s Thirties Storm coat, with snaps arranged in an S-curve down the front and angled pockets, and spiffed up another brand staple— the four-pocket belted racing jacket — with dusty blue leather. Olive green coats with military details, and waxed cotton anoraks with touches of velvet were sturdy but ladylike.

Curvy paneled dresses and body-hugging knits were curvy and modeled on scuba gear, while a white leather skirt was adorned with strips of neoprene lace, real lace and gauze. Leather featured prominently, as Ninous used it for perforated biker jackets and more formal black-and-white bonded coats that should move seamlessly from turf to city sidewalk.