Hussein Chalayan’s breezy resort collection took inspiration from Cuba, where he traveled last year and was taken with its “hybrid” of cultures. 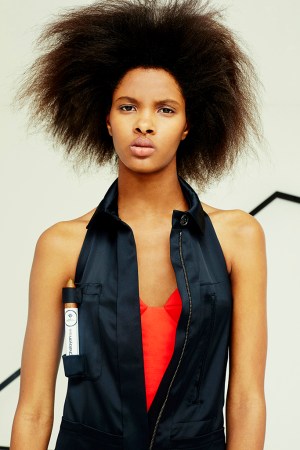 Hussein Chalayan’s breezy resort collection took inspiration from Cuba, where he traveled last year and was taken with its “hybrid” of cultures: a blend of Spanish colonial, American and later, Socialist history. “We try to always create hybrids with the way we combine ideas, but the country itself is a hybrid,” said Chalayan.

To evoke the country’s mood, Chalayan wove a gray and white jacquard depicting dancing couples and a trombone player on a bustier top and matching shorts, as “there’s music everywhere,” he said. His take on Cuba’s military dress came in a sleeveless khaki dress with military pockets at the hips and a cigar-holding pocket at the bodice. It was a youthful lineup with fun elements, such as a print of an insectlike character called Plonk, taken from a Forties book by Joan M. Davies. Chalayan reimagined the character in Cuba, picturing it swimming in the sea, or studying a book of statistics.