Drawn to the concept of synthetic color for resort, the designer hand spray painted his signature shapes to give them arresting dégradé effects. 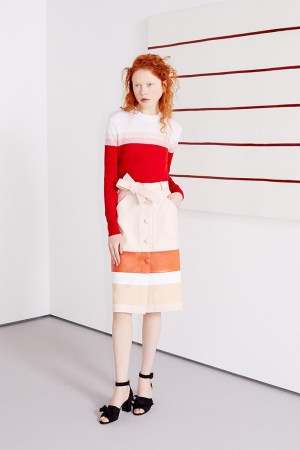 Jonathan Saunders played with his signature shapes for resort — among them bias-cut dresses, shifts, sweaters and bomber jackets — but took an experimental approach to colors and fabrics. “I was drawn to this notion of using synthetic colors,” said Saunders, who added that he wanted his garments “to have the illusion of synthetic-ness to them, even though they’re silks and wool crepes and all those natural fibers.”

To wit: Saunders hand-spray painted one T-shirt top and pencil skirt combo in arresting, dégradé stripes of orange, pink and yellow, while a bias-cut crepe slipdress was spray-painted yellow and white, and coated with sequins. The designer also gave lace a modern slant, working one shift dress in a pink-and-white lace woven in a geometric pattern.

Saunders contrasted those graphic looks with a few romantic silhouettes, such as a series of floaty chiffon dresses printed with tiny dots in blues or pinks, a pattern the designer called “a cross between a pixelated television and my interpretation of pointillism.”