Riccardo Tisci explored the concept of wardrobe by revisited the items and shapes established during his 10-year tenure at Givenchy. 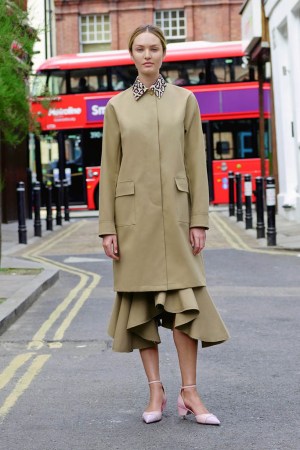 Wardrobe — the word is very much part of the current LVMH vocabulary, popping up in Riccardo Tisci’s Givenchy resort press notes. His collection revisited the items and shapes established during his 10-year tenure at Givenchy, such as bomber jackets and the contrast of structured tailoring with romantic blouses. The exception was the color black, which he benched for the season. Color and patterns spanned a muted green, white, pink, engineer stripes and a leopard print inspired by a Robert Mapplethorpe photo. There was also an emphasis on denim, a relatively new addition to the Givenchy closet.

Stripped of the elaborate trappings of Tisci’s runway, the silhouettes exuded a simplified sensuality that balanced edge and femininity, but tipped in favor of the latter. Familiar yet refreshed, the hourglass lines of a green tailored vest with a structured peplum and a single large button at the waist over the new skirt shape — midi with a mermaid ruffle and peekaboo cutouts on the thighs — felt like something you will see on Kim Kardashian. A slinky pink leopard print slip dress demonstrated the body-conscious side of the new ruffled skirt. A long-sleeved straight gown that looked like a mesh of sequined stars managed to be covered up and overexposed at the same time.