The collection reflected a desert explorer theme and palette of sandy tones. 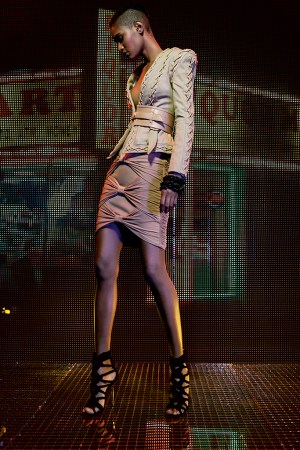 Olivier Rousteing’s first runway outing for Balmain’s men’s collection also featured the debut of part of his women’s resort collection, which was designed in parallel and reflected the same desert explorer theme and palette of sandy tones.

“Neutral doesn’t have to mean neutral,” he declared, meaning the beige colors were applied to hyper sexy silhouettes with dense surface treatments. Cord macramé was perfectly executed on short dresses and spliced with gold eyelet, while various versions of the famous YSL “saharienne” paraded: skintight and belted in suede, more fluid in a viscose knit gown with cinched sleeves.

According to the press notes, the full collection — which will be shown in Paris during couture week — includes strong pops of color and references to the sea.

On the runway, however, Rousteing stuck to razzle-dazzle. Towards the end of the show, a loner black leather skirt suit appeared, riffing on Eighties Claude Montana with its oversized shoulders and sculptural cut. The designer’s nostalgia for that era’s power dressing has been evident for years now and it would be good to see him explore new territories.